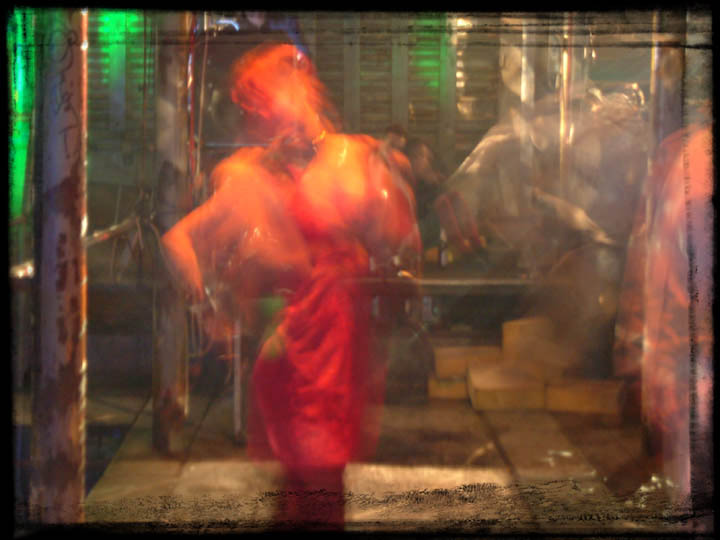 Is currently dormant but not for long! Madcap improvisational electronic swamp jazz. Trodza and Nexus are playing as, well, Trodza VS Dr. Nexus. blueprint has recently appeared alongside the good Dr. for audio-visual performance sculpting.

ee was founded by Dr. Nexus in the context of a weekly improvisation experiment in Berlin's I.M. Eimer, in the winter of 2002. During 2003, we played often - from Rostock's MS Stubnitz to Amsterdam's Illuseum.

Dr. Nexus, painter, performance artist, beat maniac has been active in organizing performing and visual artists in Berlin for many years. Solo recordings include: dr. nexus: one, 200, and Dr. Nexus 2, 2003

Trodza, guitar, damn it! has been known to induce tinitus in audiences of northern extraction. In a previous life, he appeared as one half of Trodza vs Unkuentz. His most recent non-nexus recording is Waste Cap 13.

blue, audio-visual samplers, has been making multimedia for 15 years. His first book, The End of Light, is out of print. He will write others. You will never read them.

If you select the ee audio link in the main menu, your may listen to some of the recordings made in 2003. If you wish, the CD, Yes we are, may be purchased for 15 Euro + shipping (2 Euro). email blueprint.

Dr. Nexus The current shape of the system is now here .... http://www.emergencysystem.de/